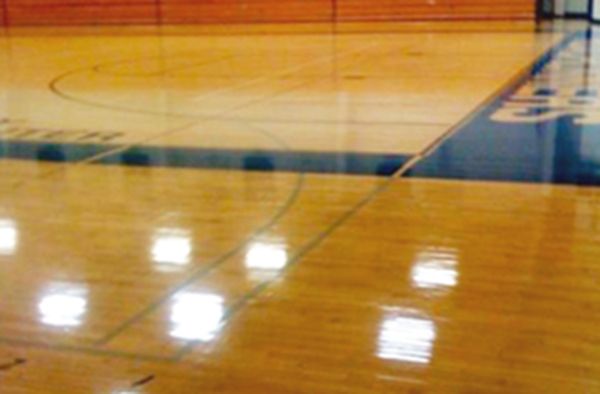 Schools have learned there are longer lasting gym floor urethane coatings available for demanding schools. These NeverStrip products replace the use of conventional gym floor urethane products, which require annual applications. NeverStrip Gloss, Satin or Matte are typically re applied once every 5 years versus annually.

Q: What is a dictionary definition of addiction?

A: It is the state of being enslaved to a habit or practice.

This definition aptly fits what most schools do every year to re coat their wooden gymnasium floors. Every year, schools apply or have applied for them “conventional gym floor urethane coatings” to re finish their floors.

It is not necessary to re-apply a finish to these floors every year! Once a year applications are a good thing for the contractor doing the work and the urethane manufacturer but not for the school.

NeverStrip is a better way to maintain wooden gymnasium floors.

NeverStrip Gloss, a high-performance, water-based urethane coating, has successfully been used on wooden gymnasium floors at schools for over a decade. The re-coat cycle has been every five years not every 12 months. NeverStrip has longer lasting gym floor urethane coatings for demanding schools.

Q: Why does NeverStrip last 5 years?

on the school’s gymnasium floor.

“The NeverStrip product has been brilliant in terms of its performance during harsh winter weather with salt and snow. We have had no problems with this floor coating since we started over a decade ago.

The gym has been the school's only one, until just recently, for an 850 student high school with 364 days of activity each year.

Basketball coaches and players love the traction. Volleyball players, not so much, because it does not allow the players to slide as well.

NeverStrip Gloss has been recoated on the gym floor only twice in a decade!

Not only has this saved Nazareth a lot of money but previously every Summer, the gym was closed for 2 weeks to refinish the floor. These two weeks and the odors drifting into the school were an absolute pain. We no longer close the gym for two weeks every summer for floor sealing and the NeverStrip product has essentially no odor.

For more information on NeverStrip Gloss and the other NeverStrip Thin-Film coatings go to:

The gym is now closed 2 days every five years for re coating versus 14 days every year. Ed went on to say, I believe we could have gotten another 5 years. NeverStrip's best floor coatings are worth their weight in gold.

The NeverStrip Gloss has an outstanding shine. After years of use, this best floor sealant maintains its shine and there is essentially no wear in the key area of the basketball court. Wear patterns in the key area of the floor typically appeared within 6 month using conventional gym floor urethane finishes.

The floor is maintained with daily dust mopping and frequent auto scrubbing with a red pad.

Another critical consideration in the use of NeverStrip Gloss on wooden gymnasium floors is how infrequently the floor needs to be sanded to the bare wood. A typical gymnasium wood floor is sanded to the wood and re finished once every 5-7 refinishing’s or once every 5-7 years. The life of such a wooden floor is about 7 standings or 35 to 49 years, when a new wooden floor needs to be installed. Compare 35-49 years to five times the # of years or 175+ years before one has to replace the floor when using NeverStrip Gloss.” What are you waiting for? Order our best floor coatings today!